Civic Matters Instagram Live: Our Stories: How We Started and Why Civics Matters

Attendees got to know the people behind Civic Matters, such as WCC Workshop Facilitator, Deneisha Thompson, and WCC Board Member, Dayanna Torres, about why civic engagement matters now more than ever for women in NYC. Attendees learned about ranked-choice voting and participated in a Q&A and discussion about voting and elections. The workshop was led by Deneisha Thompson and featured guest speaker Aarati Cohly from DemocracyNYC.

Take a look at the Voting Resource Toolkit WCC made in collaboration with DemocracyNYC and the New York City Civic Engagement Commission here. Our City Our Vote Rally for One Million Voices

WCC joined elected officials, community members, and the Our City Our Vote Coalition for a rally in Corona, Queens.  The coalition celebrated reaching 34 co-sponsors and called on the New York City Council to immediately schedule a hearing on Intro. 1867. You can watch the full video here. An introduction to civic engagement, connect with other women, and share ways in which women can take action in their communities. A fun and casual conversation about civics where attendees learned what it is, why it matters, and how they can make a difference in their families and communities. Participants were able to connect with other like-minded women and gain resources. Local Elections: A Panel on How and Why to Vote

A conversation with DemocracyNYC and the NYC Civic Engagement Commission to get the word out about the city’s 2021 elections, ranked-choice voting, and advancing voting rights. The event was moderated by Melva M. Miller, ABNY, and featured panelists Roshni Ahmed, Women for Afghan Women, Lurie Daniel Favors, Esq., Center for Law and Social Justice at Medgar Evers College, and Bitta Mostofi, Mayor’s Office of Immigrant Affairs.

You can watch the conversation here and see the Voting Resource Toolkit here. 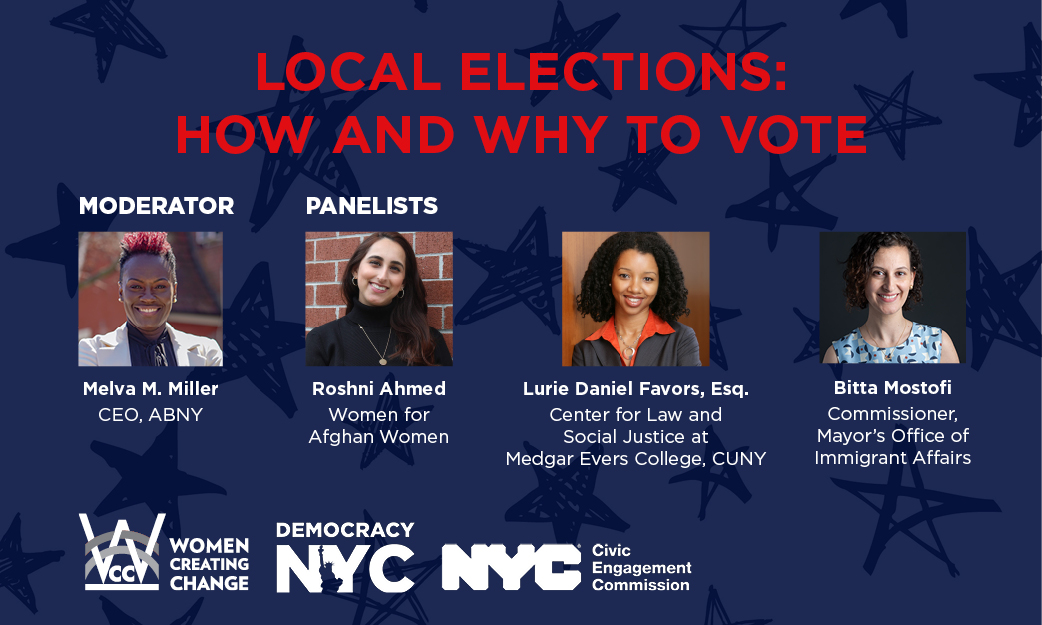 A conversation about the power of storytelling and WomensActivism.NYC, featuring Spirit Tawfiq, and their goal to collect 20,000 stories by the end of 2020 to honor the anniversary of women winning the right to vote in New York State in 1917 and in the United States in 1920. Participants learned about this historic opportunity to collect untold stories about amazing NYC women and get guidance about how to write and submit their own stories.

You can watch the powerful conversation here and read more about the Table Talk here. A conversation featuring L. Joy Williams, and Wendy Weiser,  about the aftermath of the 2020 Election including next steps for the country and city; civic engagement beyond the ballot; and where to go from here. You can watch the conversation here and read more about the Table Talk here. A conversation with Kym Hampton, WNBA/NY Liberty Legend on the importance of voting, what is at stake in this election, and what we can expect after the final polls close, followed by a live Get Out the Vote phone banking session. You can read more about the Table Talk here. A discussion about issues surrounding voting, creating a voting plan, gaining knowledge about voting rights, and learning how to get involved in voter outreach and voter advocacy. Participants learned about the importance of voting, the role of voter suppression, and how to vote in 2020 and beyond. A conversation about the play Finish the Fight and the forgotten women of the Suffrage movement featuring playwright Ming Peiffer and Director Whitney White. You can watch the recording here and read more about Table Talk here.

A training in collaboration with Census Counts,  League of Women Voters NYC,  NY Counts 2020 and the New York Immigration Coalition (NYIC). More than 30 participants learned census facts, contemplated the best way to communicate the importance of the census, and brainstormed ways to engage their own networks.  You can watch the training here and read more about the training here.

A conversation with Dr. Sarah Sayeed about the challenges of civic engagement during the COVID-19 crisis. You can read more about the Table Talk here.

A conversation with Jacqueline M. Ebanks, former Executive Director of WCC and current Executive Director of the Commission on Gender Equity, Office of the Mayor, The City Of New York, who discussed the challenges women are facing during the Covid-19 pandemic and the potential long-term implications to their lives. You can read more about the Table Talk here.

WCC proudly celebrated International Women’s Day on The Plaza along with many inspiring advocates—including model and activist Karlie Kloss. Read more about WCC’s appearance on the Today Show here.

The conversation focused on the 2020 Census and addressed the importance of counting women and girls to ensure they receive a fair share of political representation. You can read more about the Table Talk here. A celebration of the 100th anniversary of women gaining the right to vote and screen a new film spotlighting Frances Perkins — one of the Women’s City Club of New York’s founding members.

A March to raise awareness about gender equity, to strengthen women’s collective power, and to combat division and hate.